Pump Up The Tunes With Our New Jukebox For Events!

Pump Up The Tunes With Our New Jukebox For Events!

Custom Experiences, Electronics, Fun for Adults, Fun for All Ages, Fun for Teens, Game of the Week, Out Of the Box, What's Hot

Nostalgia is trending and we’re bringing it back in event entertainment by adding a 1015 Bubbler Jukebox to Amusement Masters’ inventory! No waiting on the DJ to play your song…adding our 100 cd jukebox to your event will allow attendees to hear the music they love when they want! A conversation starter, it’s the perfect addition for social events, corporate functions, holiday parties and fundraisers. Also, if you’re looking for an entertainment element to help establish an event theme, the iconic jukebox can take your guests back in time to a great one! Click HERE to connect with our team and find out how to bring the Jukebox to your next event! 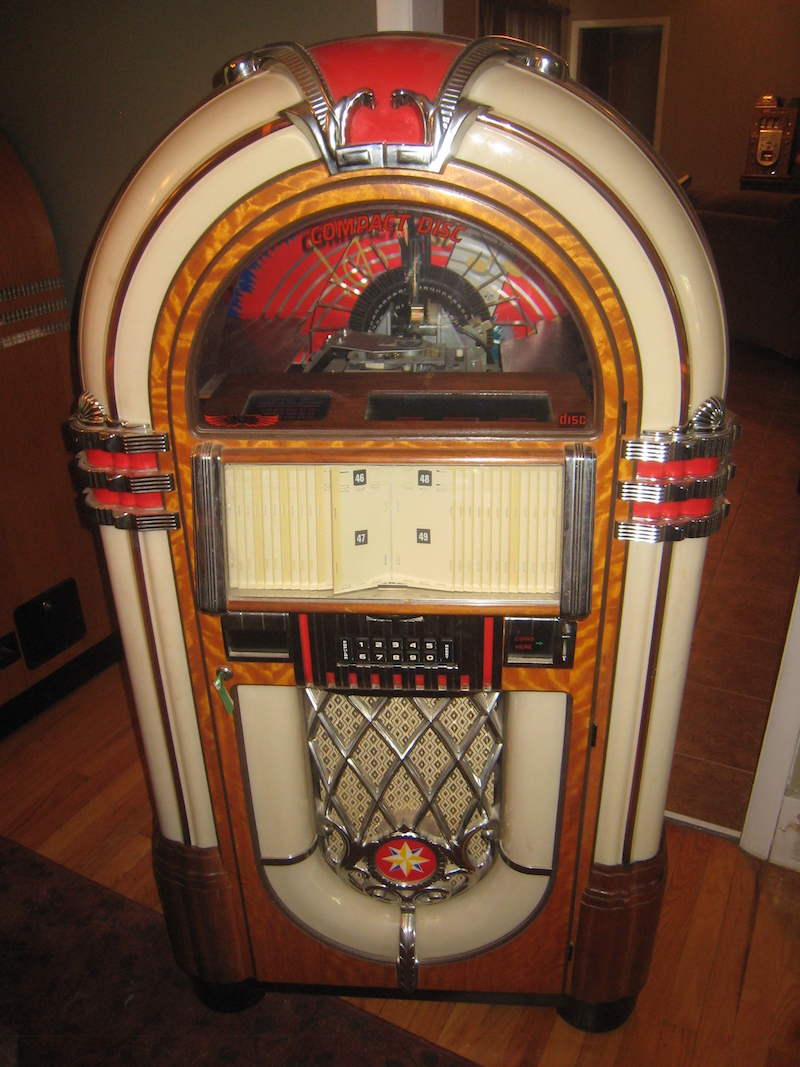 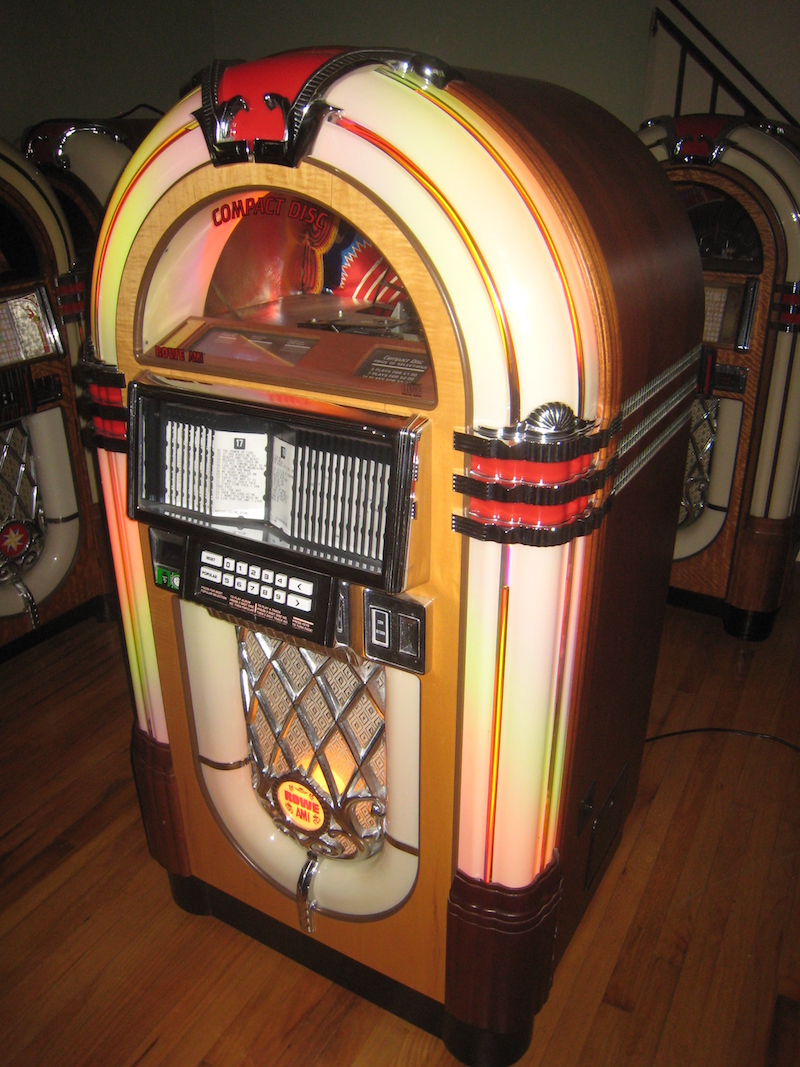 HISTORY OF THE JUKEBOX
Credit: Wikipedia

Coin-operated music boxes and player pianos were the first forms of automated coin-operated musical devices. These instruments used paper rolls, metal disks, or metal cylinders to play a musical selection on the instrument, or instruments, enclosed within the device. In the 1890s these devices were joined by machines which used actual recordings instead of physical instruments. In 1890, Louis Glass and William S. Arnold invented the nickel-in-the-slot phonograph, the first of which was an Edison Class M Electric Phonograph retrofitted with a device patented under the name of Coin Actuated Attachment for Phonograph. The music was heard via one of four listening tubes.

Early designs, upon receiving a coin, unlocked the mechanism, allowing the listener to turn a crank that simultaneously wound the spring motor and placed the reproducer’s stylus in the starting groove. Frequently, exhibitors would equip many of these machines with listening tubes (acoustic headphones) and array them in “phonograph parlors”, allowing the patron to select between multiple records, each played on its own machine. Some machines even contained carousels and other mechanisms for playing multiple records. Most machines were capable of holding only one musical selection, the automation coming from the ability to play that one selection at will. In 1918 Hobart C. Niblack patented an apparatus that automatically changed records, leading to one of the first selective jukeboxes being introduced in 1927 by the Automated Musical Instrument Company, later known as AMI.

In 1928, Justus P. Seeburg, who was manufacturing player pianos, combined an electrostatic loudspeaker with a record player that was coin-operated, and gave the listener a choice of eight records. This Audiophone machine was wide and bulky, and had eight separate turntables mounted on a rotating Ferris wheel-like device, allowing patrons to select from eight different records. Later versions of the jukebox included Seeburg’s Selectophone, with 10 turntables mounted vertically on a spindle. By maneuvering the tone arm up and down, the customer could select from 10 different records.

The term jukebox came into use in the United States beginning in 1940, apparently derived from the familiar usage “juke joint“, derived from the Gullah word “juke” or “joog” meaning disorderly, rowdy, or wicked.[6] As it applies to the ‘use of a jukebox’, the terms juking (v.) and juker (n.) are the correct expressions.

Song-popularity counters told the owner of the machine the number of times each record was played (A and B side were generally not distinguished), with the result that popular records remained, while lesser-played songs could be replaced.

Wallboxes were an important, and profitable, part of any jukebox installation. Serving as a remote control, they enabled patrons to select tunes from their table or booth. One example is the Seeburg 3W1, introduced in 1949 as companion to the 100-selection Model M100A jukebox. Stereo sound became popular in the early 1960s, and wallboxes of the era were designed with built-in speakers to provide patrons a sample of this latest technology.

Initially playing music recorded on wax cylinders, the shellac 78 rpm record dominated jukeboxes in the early part of the 20th century. The Seeburg Corporation introduced an all 45 rpm vinyl record jukebox in 1950; since the 45s were smaller and lighter, they soon became the dominant jukebox media for the last half of the 20th century. 33⅓-R.P.M., C.D.s, and videos on DVDs were all introduced and used in the last decades of the century. MP3 downloads, and Internet-connected media players came in at the start of the 21st century. The jukebox’s history has followed the wave of technological improvements in music reproduction and distribution. With its large speaker size, facilitating low-frequency (rhythm) reproduction, and large amplifier, the jukebox played sound with higher quality and volume than the listener could in his or her home, sometimes music with a “beat”.

Jukeboxes were most popular from the 1940s through the mid-1960s, particularly during the 1950s. By the middle of the 1940s, three-quarters of the records produced in America went into jukeboxes. While often associated with early rock and roll music, their popularity extends back much earlier, including classical music, opera and the swing music era.

Styling progressed from the plain wooden boxes in the early thirties to beautiful light shows with marbelized plastic and color animation in the Wurlitzer 850 Peacock of 1941. But after the United States entered the war, metal and plastic were needed for the war effort. Jukeboxes were considered “nonessential”, and none were produced until 1946. The 1942 Wurlitzer 950 featured wooden coin chutes to save on metal. At the end of the war, in 1946, jukebox production resumed and several “new” companies joined the fray. Jukeboxes started to offer visual attractions: bubbles, waves, circles of changing color which came on when a sound was played.