Custom Experiences, Fun for Adults, Fun for All Ages, Fun for Kids, Fun for Teens, Game of the Week, Out Of the Box, Sport, What's Hot

The newest film in the series of Marvel Comics movies, Spider-Man: Homecoming opened last week with a successful summer box office weekend…making it the #1 movie in the world. But just the week before Spider-Man was swinging into our Lynchburg, Virginia event and climbing the Ninja Tower! Thanks Spider-Man, we look forward to you dropping in again soon. Next time, check out our Adrenalator! 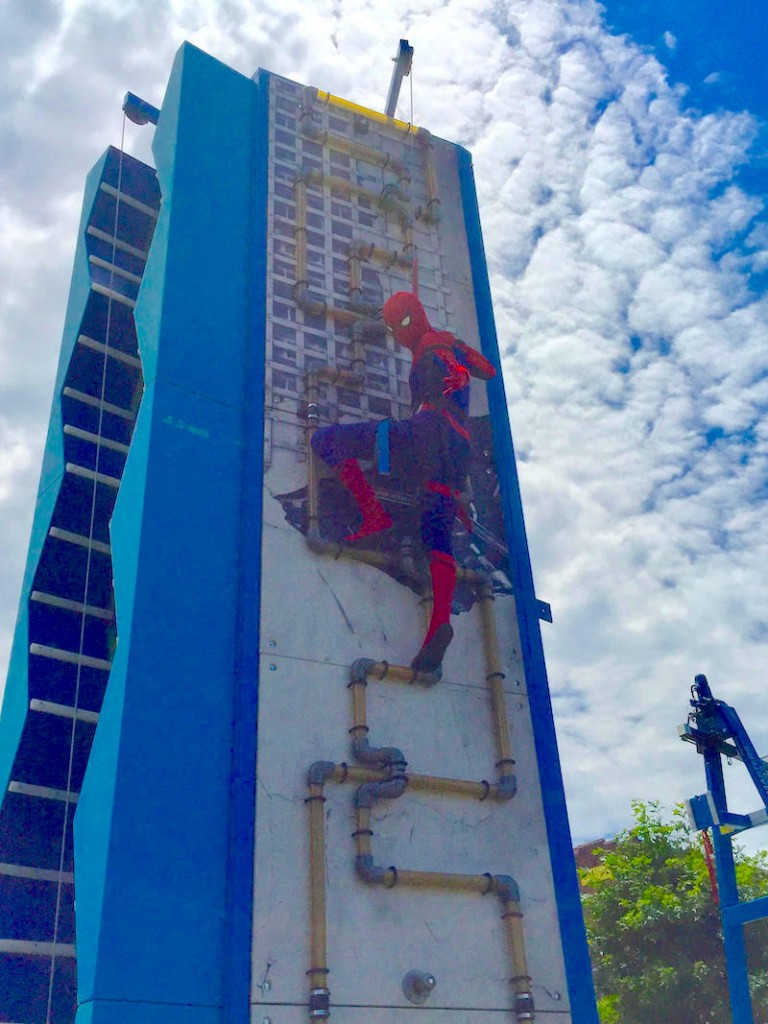 ABOUT THE FILM:
Spider-Man: Homecoming is the second time actor Tom Holland has played Spider-Man. The first exciting time was in Captain America: Civil War where we saw Holland bring the new iteration of this superhero to life. It was thrilling then and even more so in his own stand alone movie. Finally we get to see an awkward Peter Parker turn into the hero we all want to see. The film’s timeline begins directly after Spider-Man’s fight along side the Avengers in 2016’s Civil War. There is a bit of plot that gives the audience some context from eight years before during the Avenger’s NYC fight with Loki.

Peter Parker has some typical teenage moments with his adult mentors Tony Stark (Robert Downey Jr.) and Happy Hogan (Jon Favreau), who offer advice that Peter follows and also ignores. With the addition of Tony Stark into the Spider-Man franchise fans are given a full dose of the Marvel Universe that they have been clambering about for years. Aunt May played by Marisa Tomei is also fabulous and gives us some of the more family moments of this much needed teenage format.
This version of Spider-Man and Peter Parker is less cocky that some of the other offerings we’ve been spoon fed through the years. Something that Holland latches onto and really makes his own. It is part of what makes the story believable and what makes Holland so lovable. The movie delivers some genuinely effective action/suspense, ranging from the Washington Monument to the Staten Island Ferry to Coney Island and beyond. Director Jon Watts has put together a well crafted movie for the superhero genre. Sure there are bad guys and explosions, but the movie has a lot of heart and just the right amount of CGI.
Overall, this is the best of the Spider-Man movies – by far. Actually using a teenage actor in the role of Spider-Man is very pleasing and genuinely needed for believability. As for story, this might be the best superhero story so far to have gotten it so right. If you’re a fan or not this is a good movie on its own merits. Swing down to your friendly neighborhood theater and catch it on the big screen!
about the film, Adrenalator, Amusement Masters, amusements, box office, box office weekend, challenges, competition, corporate party, Custom Party, entertainment, events, film, fun and games, Lynchberg, Marvel Comics, movie, nationwide, Ninja Tower, Peter Parker, Spider-Man, spiderman, summer box office, summer movie, team building, themed event, Themed Events, Tom Holland, United States, Virginia, we travel
X